There’s a place my heart and mind frequently go when I meditate on the love of God.

It’s a place where, on hard days, deep sadness, yearning and joy collide; on easier days, they simply intertwine.

Long before Chloe fell ill, long before my world fell apart, I fell in love with a verse from Zephaniah.

Someone had put the words to music, and as I sang the little chorus alone or in groups I could almost sense the warmth of God’s arms around me, the tenderness of his eyes on mine, and the joy in his voice as he sang his song of affectionate love to me. It brought joy to my heart.

Fast forward to the days of Chloe’s suffering.

I would sing to her, albeit off-tune, the sweet and true lyrics of “Jesus Loves Me,” even while crying bitter, heartbroken tears, yearning for her to be healed, longing for her to know how very precious she was.

Fast forward further to the inevitable and terrible day of her passing. I was still singing, and still questioning.

Then came the afternoon when we had to lay her in that grave. I couldn’t bear to watch as they covered her casket with soil, but Juan, bless his heart, stayed with her little body till the end.

Even as we said good-bye, I knew that her soul was long gone and that in some miraculous way she was resting in the warmth of God’s embrace, cradled in his arms, free of suffering and pain.

I knew beyond doubt that she was—and will forever be—loved. Tenderly loved and rejoiced over by her Creator and Savior. Loved and treasured by us.

So when the time came for us to choose a gravestone and select an epitaph, it only made sense to include lines from that comforting verse:

Amazingly, a year after Chloe’s passing, a dear friend gifted me with a powerful, perfect reminder that Chloe was “Safe in the Arms of Jesus.” In this depiction of deep love, Jesus sits in a rocking chair and tenderly embraces a tiny babe.

Most poignantly, it’s nail-pierced hands that hold the babe. 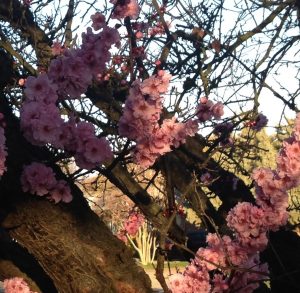 A number of years ago, I took offense.

The details, of course, don’t matter. Suffice it to say that my pride was wounded and that I was left holding a grudge—a grudge that played havoc with my emotions and interfered with my peace of mind. The ripples traveled; negative feelings are hard to hide.

At the time I was aware that my plight probably resembled that of the infamous Euodia and Syntyche in Paul’s letter to the Philippians. Their conflict had intensified to such a degree that Paul had to call them out by name and urge them “to be of the same mind in the Lord.” While the source of their disagreement is left to our imagination, they were probably engaged in some sort of rivalry that was infecting all those around them.

Regardless of the details of their situation, Paul’s plea for them to come to their senses seemed like it was addressed directly to me and the person I perceived to be my “rival.” In my case, though, it was falling on deaf ears.

Because, of course, being of the same mind in the Lord is rather impossible if you’re caught up in ego issues and you’re in a desperate search for the kind of added-on value that has human recognition and approval as its source. My yearning for significance overshadowed my desire for true harmony, and the result wasn’t pretty. An envious heart doesn’t produce good fruit.

Sadly, I held that grudge for too long.

Then God took me on a new leg of my journey, one that shifted my focus from competition and comparison to a battle for my daughter’s life.

We lost that fight, and the pain from that horrible time still cuts deep into my soul. I distinctly remember, though, one brief conversation with my “rival” while we were in the midst of my daughter’s ordeal. I had been feeling overwhelmed by folks who kept telling me to “have faith,” but in contrast, the words this woman spoke that day freed me—at least temporarily—from guilt over my perceived failure in the realm of belief and healing. I felt surprisingly understood and encouraged. She even gifted me with a book of meditations that spoke life, light, and love to my soul during that devastating time.

But though tensions eased, true reconciliation was a long time coming. Our lives led us in different directions, and since we rarely saw one another there was no driving need to work through any issues from the past.

God, however, does amazing things—even after 20 years. Our paths recently converged again in the context of growth toward a more contemplative following-after of Jesus. By coincidence, and at different churches, we’re both participating in a three-year spiritual formation process put together by an organization called VantagePoint3. The focus is on exploration of who God is, who we are, and what He desires to do in us. We’re learning to pay more careful attention to what He’s revealing through His Word and through the circumstances of our lives.

When I saw some of my former “rival’s” posts on Facebook, I realized that she was seeking and treasuring the kind of walk with God that I was pursuing as well. So when it came time for me to find a mentor for this new journey, I sensed God indicating that she might be just the one to accompany me on the path.

They say that we should take note of the kinds of things that make us cry. In movies, the point that tends to bring me to tears is when rifts are healed and new understanding is born. Was God bringing my former “rival” and me to such a moment?

It seems that He was. To this woman’s astonishment, I asked her to be my mentor, and after prayerful consideration, she agreed. At her wise insistence, we first dealt with “the elephant in the room,” each acknowledging our issues, reactions, and pride of the past. Then we put it all aside and embarked on the first steps of this new phase of our lives.

As we meet, encourage, and prayerfully support one another, I’m gleaning wisdom from the insights my friend has gained during her own journey this past year. We’re now walking together on a path toward greater intimacy with God, not as competitors, and not, for me, as a person desperate to prove my place in the world.

And this brings me greater joy than I would have imagined some 20 years ago.